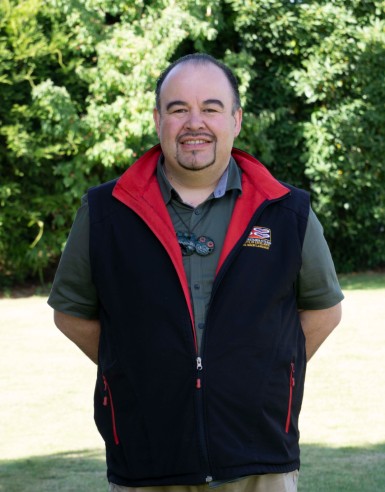 Kauhehei is above
Kahotea is below
There resides the high born paramount chieftainess
Who abated an aching heart, the result of Te Whare o Ngarue being forsaken, alas!

5     Waitete the pet dog of Tūrongo
Who was left near the waters of Taraika
(rhythym chant)
To serve as a companion for the descendent of Paikea, the firstborn male of Uenuku
A pet dog for the grandchild of Kahungunu who was renowned for his prowess with women
10   Here boy, here! Bark, bark, bark!

Let your nose lead the retinue, boy
So that we may travel north to Te Wairoa-hōpuaua hōngenengene matangirau
Let us travel inland to the bathing place of Haumapuhia
We shall persevere along the path to Huiarau, there yonder reside the people clothed in the mauku fern
15   who are lavish with food, goods and people who are lost to the underworld
Here boy, here! Bark, bark, bark!

Tete, drink now from the O-Hinemataroa stream that flows to Te Mānuka Tūtahi
It was Toroa who begat Ruaihona, who then begat Tahinga o te rā
Alas, my friend, it is the ancestral lineage of Rākeitekura of Mātaatua
Traverse the path along the coast of the bay of Toitehuatahi to your kin of Ranginui, to the son of Tamatea who traversed the land and the sea
20   Here boy, here! Bark, bark, bark!

Kaimai is where the waters of the womb broke
Descend now, my firend, the Te Ara Pōhatu path to Whenuakura, to the place where Raukawa was born

Go fourth now, Tete
Sniff out the scent of your master who resides in the Wharepūhunga region at Rangiātea

Rest now, boy, at the feet of the multitude
Come boy, come! Waitete the dog of Tūrongo
Bark, bark, bark

There are many Māori narratives about dogs, each tribe has their own historical narratives. This is our story about Waitete, Tūrongo’s pet dog. I have used this dog to relay Mahinarangi’s journey from the tribes of the Takitimu canoe on the East Coast in the hope that this story may continue to be told amongst my own people. I also want to uphold the accounts about this dog, as it was this dog that guided Mahinaarangi and her travelling party. The stories of Waitete have been omitted from our historical narratives, I'm not sure exactly why however, these are the accounts my elders passed on to me. As they relayed the stories to me, I thought of Waitete who would keep these accounts alive in my memory.

4. I piri ai ki te ngākau marū...
Tūrongo was heartbroken because his love for Ruapūtahanga was unrequited.

4. Te Whare o Ngarue
This refers to the house that Tūrongo built in Kāwhia for Ruapūtahanga and himself to live in. Tūrongo was deceived by his brother Whatihua when building the house, and as a result the house was unsuitable.

6. Taraika
Te Roto a Tara - Taraika was the great chief of this area in his time.

8. Paikea
Paikea was the only surviving warrior of Uenuku's 71 children who perished at Te Huripūreiata massacre. Māhinaarangi descends from Paikea.

9. Mohorangi
Mohorangi is another term for kurī (dog). This word comes from the Whangaōkena area on the East Coast.

9. Kahungunu ure paratī
In reference to Kahungunu and his eight wives.

10. Au au au
this is the sound of the bark of Waitete the dog.

14. Hukehuke i te ara ki Huiarau
The group traversed the Huiarau Range from Waikaremoana, this part of the journey was full of difficulties.

14. ...kākahu mauku
This is a tribal motto of the people of Ruatāhuna.

24. I Te Ara Pōhatu ...
Te Ara Pōhatu: this is the name of a path that runs off the Kaimai Range to Te Kaokao-roa-o-Pātetere.

26. Hikihiki, e hika, ki Te Awa-a-Taikehu
The baby was also taken to Te Awa-nui-a-Taikehu, which is another name for the Waikato River.

27. Hikihiki, e hika, ki Te Horahoratanga
The baby was carried to the other side of the river, to Te Horahoratanga-o-ngā-kākahu-o-Māhinaarangi. It was here where Waitete ran ahead.