Ko te reo Māori te moko o te hinengaro,he reo ohooho, he māpihi maurea, he whakakai marihi.
The Māori language is the blueprint to the soul and mind, a treasured adornment that is upheld with the highest esteem. 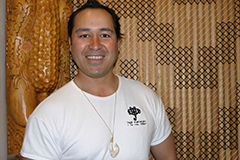 Valance Smith (Ngāpuhi, Waikato, Ngāti Mahuta) is a Lecturer at AUT University.  He teaches Te Reo Māori (undergraduate) and Tikanga Māori (post graduate) papers within Te Ara Poutama, The Faculty of Māori and Indigenous Development at AUT.  Valance also teaches at The School of Education.  His services to AUT include cultural advisor and Kaikōrero (orator).

Come and feast
Quench thy thirst in the waters of Horotiu
Come, rest
On the balcony of my meeting house
Grasp tightly

Tis a sign of salutation!
Tis a call of welcome!
Aronui, the fountain of knowledge
Come, rest.

In the month of December 2010 an idea came up to compose a supportive song or chant for Sir Paul Reeves. The idea of this particular chant arose because of his enduring strength, dedication and commitment to Māori, Pākehā and to his faith in God. Sir Paul Reeves was known throughout Māoridom and indeed many parts of the world. He was not just a great man; but a man capable of doing amazing things amongst the people. He also stood as chancellor for the Auckland University of Technology, AUT University for many years.

Therefore, this is a chant of support layered with metaphorical images that describe this man and also gives descriptions of the surrounding Auckland area. This particular song has a thematic approach in terms of using birds as the medium for which to carry the word. Incidentally this song talks of the gathering of birds in one area of which they discuss the topical issues of the time.

This chant can also be seen as a map of special landmarks of mountains, rivers, streams, bays, coves and the ocean of not only the Auckland area, but of the general Māori environment. Within this chant important ancestors and events are referred to which connects the Auckland isthmus area. This chant was also co-written with a colleague, Vallance Smith, who provided the appropriate beat to this chant and also provided various lines within the chant. Acknowledgment also needs to be given to Ngarimu Blair of Ngāti Whātua, who provided explanations according to Ngāti Whātua records, the historical events that occurred within the Auckland city area. The last acknowledgement here must be given to Sir Paul Reeves who sadly was claimed by the Māori ancestress, Hine-nui-i-te-pō, on the August 14, 2011.  It was at his funeral that Auckland and indeed New Zealand was blanketed with snow reminiscent to that of the crest of his mountain Taranaki, the falling of snow was seen as a sign of affection, as a sign of his faith in God and his chiefly status among the people.

My navigating bird has been silenced for ever,

Alas I am torn within.

Manu Tāwhiowhio: Line 1: This is a navigational bird, it is a bird chosen here as it seeks new horizons and will help those of which it guides through troubles. This bird is also the symbol of AUT University as the bird that guides AUT University.

Tini o Hākuturi: Line 2: Hākuturi can be seen as a guardian of the forest and it resembles a leader of masses, in this case flocks of birds.

Ngā Wai o Horotiu:  Line 6: The name given to the marae of AUT University, it is also a spring which emerged from the ridge of Karangāhape Road and flows down through Te Rou Kai which is an area in Auckland City and out to the Waitematā harbour.

Purengi:  Line 10: This is the name of the meeting house of AUT University, it is also a name that represents the ropes that bind the double hulled canoe together. It also connects both the mast and sails and its role is to ensure that the canoe does not break or separate. With the ropes mentioned the idea is that people are also bound together under one thought and in a common goal under the auspices of peace and well-being.

Rangitāmiro ai te kōwhao o te ngira: Line 11:  A section of this line was part of a saying which was recited by the first Māori King, Kīngi Pōtatau Te Wherowhero which was, ‘kōwhao o te ngira’. The meaning here is about weaving and connecting the different strands together under one common purpose or goal. In this particular sentence the weaving together of religions and people under one thought is realised and is seen through the ‘eye of the needle’ ‘the doorway to the lord’.  King Pōtatau also resided in the Auckland City Central namely Pukekaroro and Pukekawa (near the Auckland Museum). King Pōtatau was the significant first leader of Māoridom and can be seen as a carved figure on the veranda of the meeting house (Te Purengi). So therefore the meeting house resembles the eye of the needle through which enters the multitudes big or small. Sir Paul Reeves was likened to the eye of the needle and as a servant of the lord.

Takakawehia te ara poutama: These words were taken from the proverb used as a guiding principle for Te Ara Poutama: The Faculty of Māori Development, AUT University.

Te Ipu o Mataaoho: Line 14: There are numerous stories pertaining to this god Mataaoho. To some he came from Hawaiki, according to others he is a child of Ranginui (the sky father) & Papatuānuku (Mother Earth) however, in Auckland; Mataaoho is considered as the guardian of volcanoes. According to histories regarding Mataaoho, he brought forth fire from Hawaiki to light the peaks of Auckland. According to Ngāti Whātua, translating to ‘The Bowl of Mataaoho’ also takes other titles which are ‘Te Kapua Kai o Mataaoho’ and ‘Maungawhau’ known as or Mt. Eden or Mt. Eden Crater.

Rangipuke: Line 15: The original name for Albert Park is ‘Rangipuke’.  ‘Rangipuke’ consisted of 3 pā sites of which all fell under the one name ‘Horotiu’.

Rerenga Oraiti: Line 17: In the year 1680, a tribe by the name of ‘Ngāti Huarere’ resided along the ridgelines of Auckland. A war party from Ngāti Whātua ki Kaipara proclaimed war against them and a battle arose. The name of this battle was ‘Te Raupatu Tīhore’. According to Ngāti Whātua the famous chief Kāwharu was summoned, and it was he who led the war. It was said that Kāwharu was a master assassin or henchmen and has ties to Tainui of which he resided in Kāwhia. As a consequence, Ngāti Whātua under the leadership of Kāwharu had succeeded in their endeavour to overtake the current occupants. Those of Ngāti Huarere who survived were thrown off the cliffs of these ridges. It is said that Kāwharu had the final say as to who would live and who would die. So several fell and others jumped voluntarily since they felt if caught they would be subjected to far worse fates namely becoming slaves for Ngāti Whātua.  That is why these words were used ‘rerenga oraiti… (o Ngāti Huarere)’ to describe ‘the small flight of life of Ngāti Huarere’.

On the 18th of September, 1840 this was the period that the ‘Auckland Township’ was given birth and was also the first time the flag of New Zealand was flown. To mark the occasion the site known as ‘Rerenga Oraiti’ was renamed ‘Britomart Point’ in honour of ‘HMS Britomart’. It was this vessel which mapped out the Auckland area.

Te Whatu Tauranga kāwau tikitiki: Line 18:At the base of the Cliffside of ‘Rerenga Oraiti’ there is a stone known as ‘Te Whatu’ which in accordance to Ngāti Whātua was known as a very significant area where canoes would rest and be brought to shore.  This stone was known as an anchorage on the shores of Auckland. The term “kāwau tikitiki’ describes a chiefly person, whose prominence draws those from land and sea towards him. That is the reason why the term ‘kawau tikitiki’ is likened to the chancellor of the university whose role is to call and gather the multitudes.

Pou herenga waka: Line 19: Is reference to Auckland which was seen as ‘the mooring place of canoes’

Ko te mātāpuna o te kete Aronui: Line 22: These words were collected as a name for AUT University which captures the essence of this institution.  It is likened to the basket of knowledge ’Aronui’ which holds the knowledge of the world.